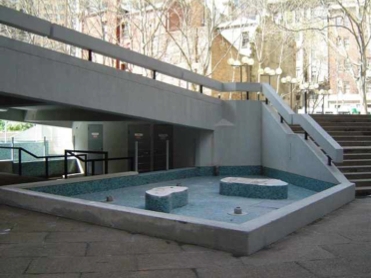 This is a view of the plaza of Nauru House, in Melbourne, Australia.

If you had a time machine and went back to 6.30pm on the 7th of May 2003, you would see me pacing around the plaza, talking on my mobile. I am talking to my mentor. For the past few months I have been debating whether to leave my current job to pursue my desire to work in the charitable sector. Despite many hours of thought, I am still confused and undecided. There are myriad of personal issues (involving values, purpose, pride and ego) and several practical ones (e.g. visa and financial implications).

It is a short phone call. I do most of the talking and my mentor provides no answers. However, the quality of their observations and the incisive nature of the (few) questions they ask, brings clarity to where there has been confusion.

The next day, I hand in my notice and within a couple of months I have taken on the role of Chief Executive at the Aboriginal sporting and community development organisation, Rumbalara FNC.

And the rest, as they say, is history. However, the impact of that call and the impact of mentoring has stayed with me. In addition to assisting with potentially life changing events, mentoring has consistently helped me with countless issues from the very immediate, alarming and specific…

e.g. ‘How do I keep this organisation solvent?’

..to the positive and more strategic …

e.g. ‘I’m enjoying what I’m doing at the moment, but what do I want to be doing next year and the year after?’

It has assisted with a whole range of personal issues too. I hope you also experience the positive impact mentoring can bring. 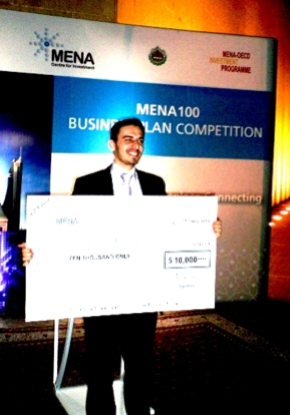 From: Hussein Natsheh Sent: 18 November 2009 09:43 To: 'Mark Hughes' Subject: RE: Congratulations! Thanks a lot! This would not have been achieved without you

This is one of my former mentees, Hussein Al-Natsheh. This photo was attached to the short email he sent me above. He is looking very happy as he has just won third place and $10,000 in a business plan competition. This is a very significant amount of money in Jordan, where Hussein lives; significant enough to allow Hussein to work full time on his business for an extended period.

Hussein’s email was prompted by the fact that our first mentoring session had focussed on his business plan for this competition. Hussein and I had been matched together through the charity Mowgli. Mowgli provides volunteer mentors to support entrepreneurs in achieving their business and personal potential, thus encouraging job creation and social development. Like all good mentoring programmes, Mowgli recommended that our first session was spent agreeing a mentoring contract, considering logistics (e.g. when and how often to have sessions) and discussing Hussein’s priorities for the year ahead. But life does not always work out like that. Hussein had just become aware of this business plan competition and the deadline was the day after our first session. Given the time available, there was not time to look at the plan in its entirety, so our session focussed on the executive summary. Edits were sent back and forth and sections were challenged, praised, iterated and clarified.

Could Hussein’s success have been achieved without me? Who knows … maybe if I hadn’t ‘helped’, he would have won the competition rather than come third!

What was clear, was that Hussein felt supported and not alone and that has value all on its own. Hopefully this case study also illustrates how mentoring can have a positive impact on very tangible, immediate issues and is not just the reserve of long-term development goals. Mentoring appreciates that both immediate and strategic issues can have a lasting impact.